The source of the majority of the following material is a book: Gresham Voices and Faces by Keith Entwhistle. It draws a brilliant picture of Gresham’s history, predominantly from the 20th century.

The name of Gresham could be derived from a local stream known as the Gur Beck, plus -ham, meaning a settlement.

There is a reference to the village in the Domesday survey where the land is held by a Norman knight, William de Warenne, who fought at the Battle of Hastings and was well rewarded with numerous holdings. The Domesday book records his lands stretched over thirteen counties and included land in Sussex, several manors in Norfolk, Suffolk and Essex, Conisbrough in Yorkshire and Castle Acre in Norfolk

In the mid 14th century there were years of contested ownership of the manor, with descendants of Sir Edmund Bacon of Baconsthorpe.  Thomas Chaucer (1367–1434), Speaker of the House of Commons, and the son of the poet Geoffrey Chaucer, acquired the manor, through marriage to a daughter of Edmund Bacon, but sold it to William Paston. The manor house had been fortified in 1319.

On the 28th January, 1448 the manor was seized by Lord Moleyns and soon after John Paston travelled to London to petition king Henry VI for its return. John’s wife Margaret was living at the castle when Lord Moleyn’s men attacked. She and her 12 servants doggedly defended the stronghold but eventually they were forced out. She records the event in one of her letters to her husband of which we have an extract below:

‘The 28th day of Januarhy Lord Moleyns sent to the said mansion a riotous people to the nombre of a thousand persons…arrayed in manner of war, with cuirasses, briganders…glaives, bows….guns, pans with fire, long crooks to drag down houses…and long trees with which they broke up the gates and doors, and so came into the mansion, the wife of your beseecher at that time being therein, and twelve persons with her: the which persons were driven out of said mansion and mined down the walle of the chamber wherein the wife of your said beseecher was, and bare her oute at the gates ….  and maner of robery bare away all the stuffe, aray and money that your sayd besecher and his servauntes had ther, on to the valew of £200.’

John Paston’s petition was successful and the family took up residence again on 6 October.

Little of the castle remains today – only a few foundations including ruined walls, part of the moat and ditches which are surrounded by trees. 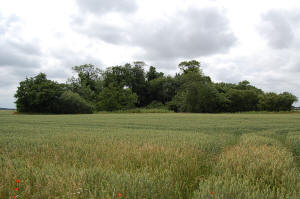 During the 19th century Gresham became part of the Felbrigg Estate, owned by the Windham family. Some of the estate houses have date stones with the initials WHW. The Windhams had to sell much of their land due to financial problems but still retained Gresham. Gresham passed into the Batt family through Colonel Reginald Batt on the death of his sister’s husband Fred Windham.